Merry Christmas to you all

and a Happy Wolf Year 2020!
At Institut Bernat Metge, our first and second years of ESO have interviewed Michelle Mancini, who is the Education Coordinator of Wolf Sanctuary PA (Pennsylvania) in the United States.  They wanted to know more about wolves and, in particular, about Geronimo, a wolf that lived in the sanctuary for 17 years (February 15, 2000- July 13, 2017).

1ST C QUESTIONS
We wanted to know a little bit about Geronimo, the wolf that used to live at your sanctuary.
Was Geronimo smart?  In which ways did you notice he was?
Geronimo, like all wolves, was very intelligent. He was a low-ranked pack member by choice and tended to avoid challenging other pack members, especially during the meal. He would always get a share, but it was often smaller than his more dominant pack-mates. Once the dominant wolves in the pack were full, they would often take extra and bury it for later, and Geronimo would watch where they hid it. He would then wait until his family members laid down for a nap and he would dig up their cached food, or leftovers, and continue to feast.
How come Geronimo lived for so long, 17 years?
The life-span of a wolf can vary, and different factors in their environment can affect their lifespan significantly. Wolves in the wild experience greater risks and dangers than in captivity, and as a result, their lifespan often averages between 5 and 7 years. In captivity, if they are well cared for, this life-span can lengthen.
The lifespan of our rescues can vary depending on their past experiences, and also on their genes. A handful of the wolves that currently live at the sanctuary were born here years ago, though we no longer breed and instead focus strictly on rescue. Geronimo was born at the sanctuary and lived out his life here with his family, thus his lifespan was a bit longer. He had good quality nutrition and care and limited risk factors throughout the duration of his life.
What happened to Geronimo? What did he die of?
Geronimo passed away peacefully resulting from old age.
If Geronimo was an omega wolf did the pack treat him differently? How?
Geronimo was a low-ranked pack member mainly by preference. He seemed to choose to avoid challenging other members of the pack, and preferred to surrender rather than fight. Though other pack members might exert dominance over him, he always knew how to show submission to avoid a confrontation. Wolves communicate through body language and vocalizations. The more dominant pack member might growl over him and hold their tail out straight and sometimes put their head on his back to show their dominance.  To show submission, Geronimo would tuck his tail and kiss up to the dominant pack member, sometimes even rolling on his back to expose his belly to show that he did not intend to fight.

2ND C & D QUESTIONS
We wished to know more about wolves, especially because some students would like to become vets in the future.
Why does everyone say that wolves are solitary animals when in reality they travel in packs?
This seems to be both a question about wolves, and about people. I believe that people tend to believe that wolves are solitary, because they are projecting a human notion of independence and solitude on them. Wolves are typically very social and prefer to live in a pack. In the wild, their survival often depends on living in the pack, both to ensure that they can defend their territory, and also to successfully find and hunt enough food to survive. Young wolves might break away from the pack to strike out on their own in search of a mate, but they are typically only alone until they can find a mate to create their own pack. Here at the sanctuary, we try to ensure that each of our residents has at lease one companion to spend their days with.

Which vaccines do you need if you want to work around  wolves as a vet?
I'm not sure of the specific requirements for vaccinations for veterinary care. It is often the case that veterinarians who work with wolves are typically specialized in exotic animals and either travel to different zoos, sanctuaries, or animal care facilities for their practice, or they are employed full time with one large facility. For example, our veterinarian travels between several different facilities, and visits us for monthly checkups or for emergencies, however at the Philadelphia Zoo, their veterinarians are full time employees and only provide their services there since it is a much larger facility. Because veterinarians who work with wildlife and exotic animals like wolves are typically trained to work with a wide variety of animals, I would imagine that they would need to at least be vaccinated for rabies, though I'm not sure which additional vaccines they might need.

Is it true that wolves attack people?
Wolves in the wild typically tend to avoid people as much as possible. They do not hunt people or any other predators and their main prey source are ungulate species, which include deer, elk, bison and other similar animals. Wolf packs tend to avoid developed areas in order to ensure the safety and protection of their pack.

Is it true that alphas have to stay in a pack?
In the wild, the alpha male and female of a pack are typically the parents. They are the only two wolves that breed in the pack, and their offspring help to form the pack. Young offspring who may wish to breed and start their own family, must leave to find a mate. The alphas are the leaders of the pack and they set the rules for the pack. Because of this, each pack has slightly different rules and roles for each of its members.
Thank you Michelle! 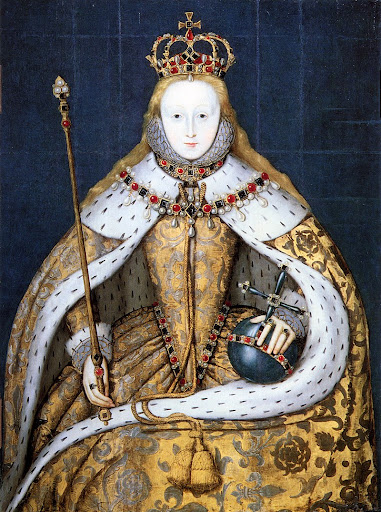 ELIZABETH I, VIRGINIA AND NATIVE VIRGINIANS